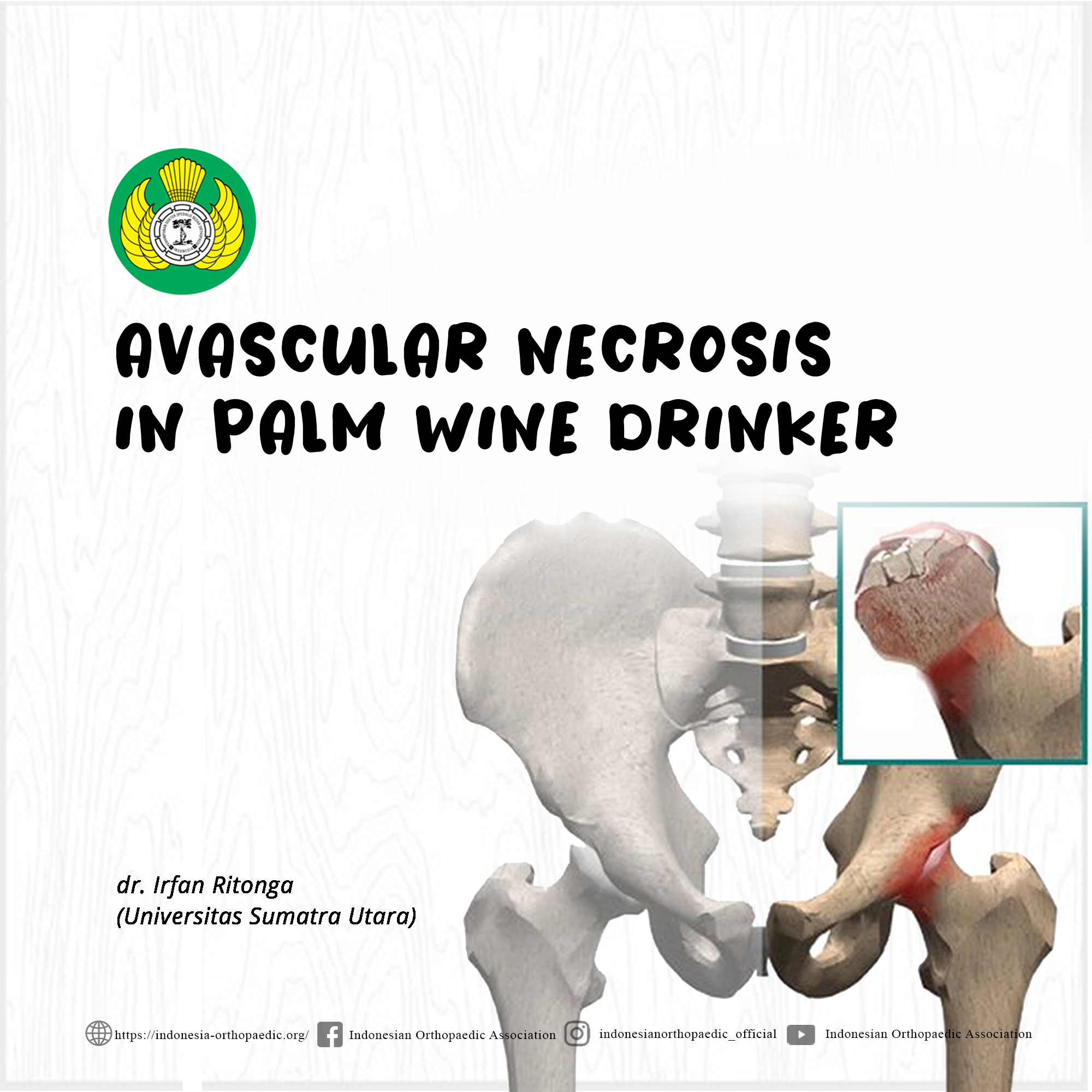 Avascular necrosis (AVN) is a long-known complication of the thigh bone neck bone fracture, caused by a disruption of the blood supplying nutrients to the bone leading to death of bone tissue. It is also commonly known as osteonecrosis, where it can lead to tiny breaks in the bone and the bone's eventual collapse. Anyone can be affected by this disease, but the condition is most common in adults between 30 to 50 years of age and in certain individuals. While the exact cause of AVN is unknown, in general it could be divided into two groups; after a history of accident (traumatic) and spontaneous (non-traumatic) AVN. In the spontaneous group, the mechanism of this disease is much more complex as it involves various processes from a disruption of blood flow, blood clotting, blood vessels swelling and compression. There are many suggested reasons as to why AVN might occur, but alcohol abuse and high dose of anti-inflammation medication are the most common suggested cause of non-traumatic AVN.

In a tropical country such as Indonesia, a well-known traditional alcoholic drink called ‘tuak’ or palm wine (made from coconut tree or palm sugar) is considered as a local delicacy to the people of North Sumatera. The traditional drink mostly consists of water, carbohydrate, fat, protein, some minerals, and alcohol which comes from fermentation of its carbohydrate content. While not only known for its high alcohol content, it could also contain an added anti-inflammatory substance known as corticosteroid. Some studies and literatures suggest that the inhibition of bone cell factory (bone marrow stem cell) to a cell producing bone called osteoblast in frequent alcohol and corticosteroid user was the reason of AVN in adults. Although the exact dose of alcohol and corticosteroid causing AVN is still unknown but it’s suggested that the alcoholic and corticosteroid level in the blood played a more important role, especially in Indonesia where drinking ‘tuak’ is considered as part of a traditional habit.

The earliest stage of AVN is bone death and it usually causes no symptoms, but by the time the patient feels any symptoms, the disease usually already advances to a more prominent AVN. Pain around the hip is a common complaint amongst patient and is usually the first symptom felt. It is felt in or near the hip joint where it could radiate to the knee, and perhaps the pain is felt only with certain types of movement or during weight bearing. Some patients may complain of a clicking sound in the joint due to a loose joint fragment interfering with the motion of the joint. In the later stages of AVN the hip joint becomes stiffer, more deformed, swelling and pain may be persistent even when lying down. If untreated, AVN will worsens over time and eventually causes the bone to lose its smooth shape and potentially leading to severe arthritis of the hip joint. Plain radiograph (X-RAY) of the hip is usually enough to diagnose AVN in most people, but some cases may need a more advance imaging such as MRI or CT-SCAN. An x-ray may show a destroyed bone (Figure 1).

In the early stages of the disease, symptoms might be relieved with rest (reduce weigh bearing on affected joint thus slowing the disease progression), exercise therapy to improve joint range of motion and medication such as anti-inflammatory or osteoporosis drugs. But if the bone has collapsed or conservative treatment aren’t helping where usually in the latter stages, a surgery to replace the damaged parts of your joint with plastic or metal parts called hip replacement is usually recommended by most orthopaedic surgeons (Figure 2).  Therefore, it is important to recognize the signs of AVN, reduce the risk factors such as alcohol and anti-inflammatory drugs, and get help from professionals when in doubt. 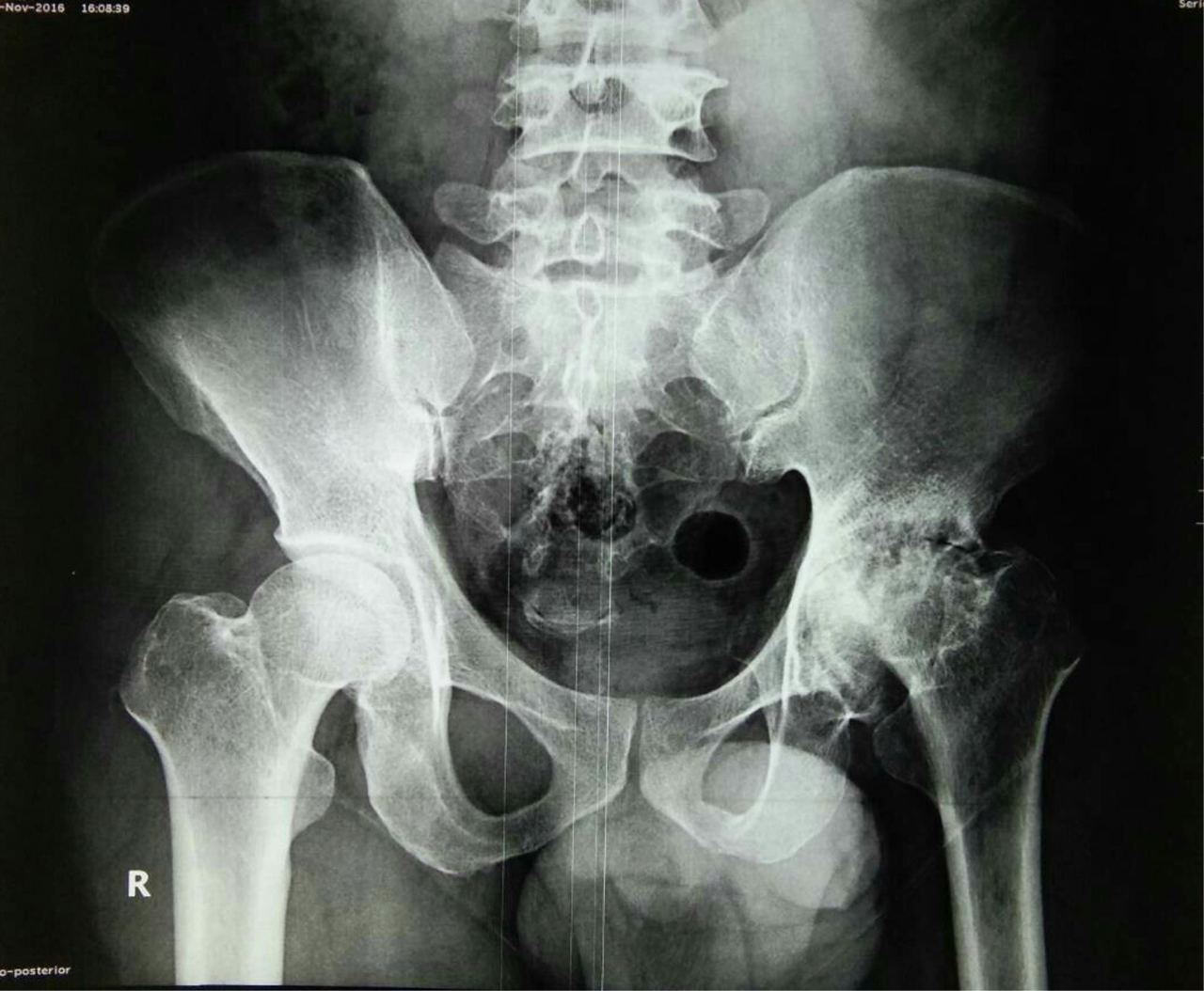 48-year-old male with months of hip pain and years of ‘tuak’ consumption history. 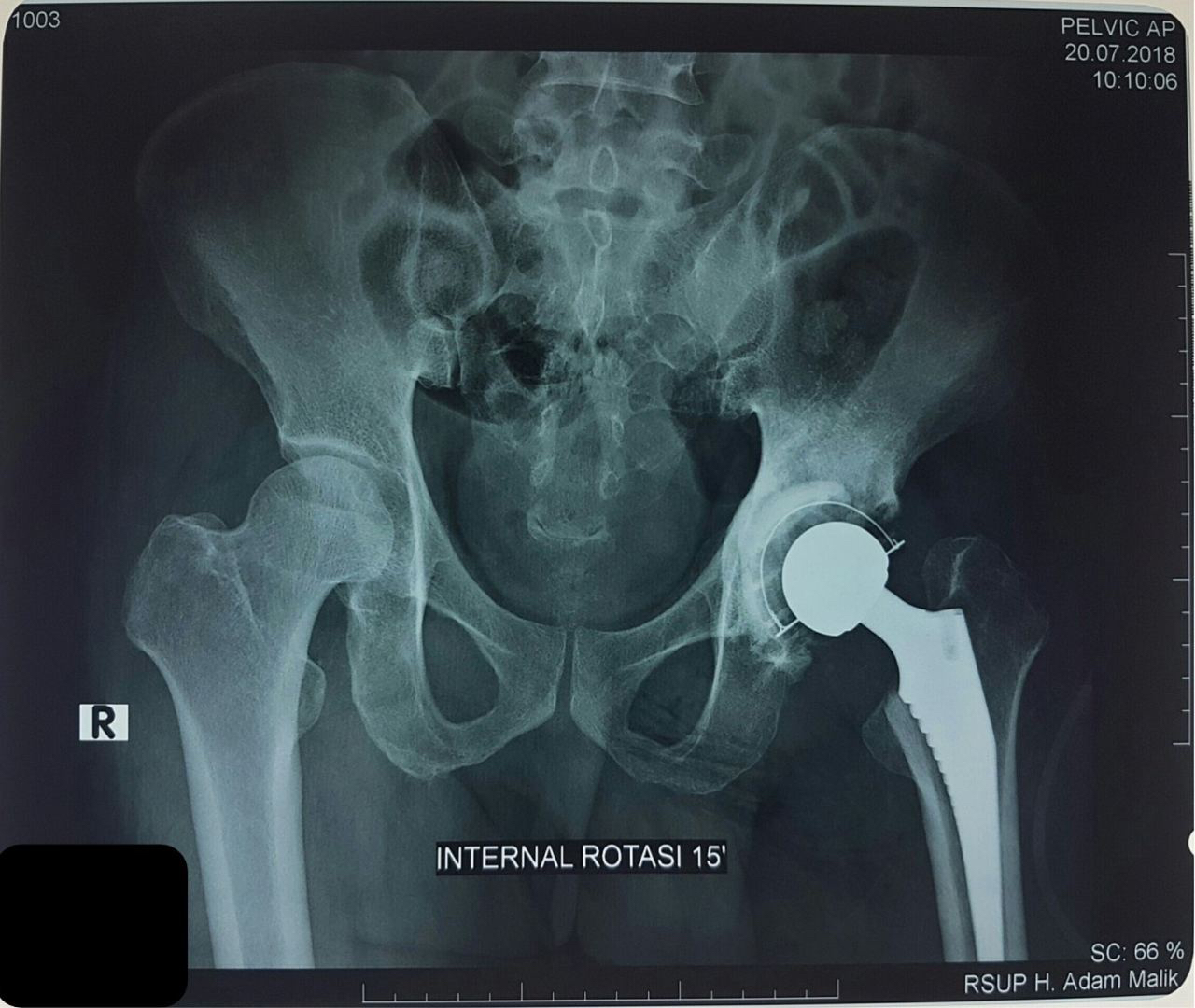 Hip replacement is a replacing the destroyed bone with metal parts to restore its shape, as shown in this patient.